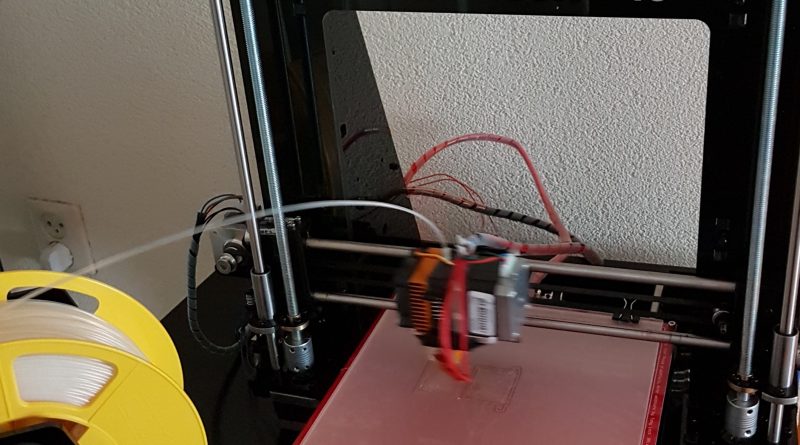 When I saw the printer on Ebay a couple of months back my first thought was: This is a scam. And who would have blamed me. I would have to pay 189 euros for a clone printer from China, shipped from Germany . So I wouldn’t have to pay any shipping or taxes at the border. (Yay Europe?)

I decided to buy it. Mainly to see what kind of junk I would get from it and write a review about it. With that being said. I paid for this device myself. There is no paid promotion here.

What do you get in the box

With that out of the way. What does 189 euros buy you? A complete kit with all the parts to build a 3d printer. They used laser cut acrylic for the bulk of the printer. Which is a lot sturdier than I thought it would be. It comes with a screwdriver kit with lots of bits to screw in all the metal components. It also comes with a component list, several extra screws besides what you need. And a glorius Geeetech pen :)( I didn’t test the pen)

The instructions are not great. The guide (tiny few leaf basic stuff) in the box comes with spelling errors all over the place. Including the “Supprot” typo mentioned in the Polymaticast a few weeks back. You have to go to a youtube channel and check out the video instructions or use a PDF.  The video instructions are ok. But typing in the url… kinda defeats the purpose. Instead of using the company domain and just put a link on that. If you are smart enough you will figure it out. But this should NOT be your first printer you built. You have to be familiar with the workings of these type of printers to make some on the fly rework decisions and troubleshoot problems. For one. The video instructions stop as soon as the building is complete. You are then stuck with the pdf for wiring the printer. 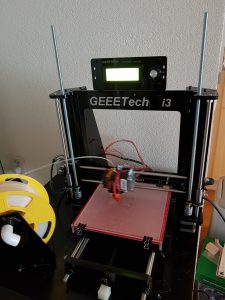 After I put the printer together the Z axis moved but not smoothly. This initial observation turned out to be a hint that I had to replace the threaded rods. They were not straight and the copper guides were getting stuck on the rod causing whirring noises. So I ordered some threaded rod (1m) off 123-3d.nl and after some cutting with a dremel (using the wrong measurements) I put them in the printer and the z-axis was running smoothly. Albeit with 15cm of threaded rod sticking  out the top.

The extruder was a whole different issue. Besides not being screwed in properly the nozzle’s ptfe tube was cut wrong which left a gap before the nozzle. This caused a jam straight out of the gate. I replaced it with another and screwed in the nozzle properly. Please note that you need to be careful with this not to over or under tighten it. If its tight, its tight.

Some other things you’ll need

There is no FFF file for the printer of the manufacturer’s site. They suggest you use slicer. But I am not a fan of slicer.  I’m more used to simplify3d’s way of working. But you have to scour the internet for a version that kind of works, then tweak it until it works. I will publish my version of the file after I’m done tweaking it manually.

“Should I buy this to build with my kid”

In talking with a few people about the printer this question has come up a couple of times. I think if you are technical enough, and have built or maintained 3d printers before you will be fine. However if you (and/or your kids) have a short attention span or your kids are not old enough to respect electronic components or bare wires, then you should not.

It actually is an pretty decent printer. Provided you dial it in properly, replace some parts and ignore the instructions in some areas.  Most components are easy to fix, except for the acrylic. Damage that and you are in trouble. For about 200 euros in total cost it prints generic PLA nicely. Once I’ve used it a bit more I will put out a final review.  I may even buy another one and place the initial build at the office. So worth the 189 euros ? Maybe.